Like C.S. Lewis’ A Grief Observed (which is a study of Lewis’ own grief rather than a commentary on grief in general), this is a record of my process in making a single, unique, harp cover. It is not a tutorial on how to make a harp cover. That said, you might still find it helpful in your own harp-cover-making adventures.

I acquired a small harp almost a decade ago. It came with no harp cover and a rather unique shape, so I decided, being a moderately-capable seamstress, to make a harp case for it.

I bought the fabric and cut out the pieces. I started pinning them together, reached the point where difficult decisions about construction design need to be made, and lost steam. Those pieces (still pinned together, mind you) have been a UFO (UnFinished Object) in my sewing truck for the past seven years or so.

Recently, I’ve been delving into the world of CosTubing: costumers who share their projects on YouTube. It’s quite motivating to watch lovely montages of other people sewing while one sews. And thanks to video magic, their projects always zip by, helping me forget how many woman-hours any particular project is likely to take me.

If you are interested in joining me in costube land, check out Bernadette Banner and Morgan Donner. For less historical but still inspiring sewing content, check out WithWendy.

Anyway, I suddenly felt motivated to finish up old projects and clean out my sewing room. To that end, I pulled out the pieces of my harp cover, unpinned them, and decided to tackle this rather intimidating task once and for all. What follows is my (non-expert) process.

I used upholstery fabric for the exterior layer (cut-out pieces pictured at the beginning of this post), polar fleece for layer of padding and insulation, and a burgundy nylon fabric for a smooth water-resistant lining. I also needed:

I have been discovering how important ironing is to the art of sewing. My first step after getting my supplies together was to iron the pieces that had been sitting in a trunk for seven years.

3. Fit the pieces and trim them down.

Assemble the pieces inside out.

One of the ideas I’ve gleaned from the CosTube is that you can just assemble fabric on your dress form (or in this case, on the harp), and pin things until they fit the way you want them to.

When I initially created the pieces way back when, I simply traced the harp on the fabric and cut those pieces out with lots of extra room on every side.

Now I pinned these loosely together and put them inside-out on the harp. With the pins I tightened the fit until it seemed right, remembering to leave extra room for the layer of padding and enough space to slip the harp in and out easily.

Not quite enough overlap

I decided to close the harp cover with Velcro along the pillar, making one side of the cover long enough to overlap the other. A zipper would have been more secure, but zippers scare me.

I had cut all the pieces so large that I ended up deciding to omit the back panel. Having it there would have created a rather complex intersection of seams at the harp’s shoulder, and even without it, the side pieces were large enough to simply meet in a center back seam.

I realized that now, without that back panel, I didn’t have quite enough fabric in the sides to overlap as much as I wanted at the base of the pillar. I ended up adding an extra triangle of fabric to one side.

5. Cut out the lining and the padding.

Once I had cut the outer layer down to size, leaving a 3/8 inch seam allowance, I traced the pieces onto the lining fabric and the padding fabric and cut everything out. (I hate cutting fleece! It makes my hands hurt.)

6. Baste the fleece to the lining.

I basted the fleece padding layer to the wrong side of the lining layer to keep everything from slipping around.

But it turns out fleece is stretchy! There were some struggles, but eventually I got it sewn down more or less flat.

7. Sew the lining together.

I ended up not having enough fleece, but since the fleece is only there for padding and won’t show at all, I was able to use some florescent green polar fleece left over from a different project. I used a zigzag stitch to attach the pieces to the lining layer.

8. Sew the outer layer together.

And promptly discover any design flaws.

My idea of having one side overlap the other was sound, but I didn’t think carefully enough when I was sewing my fleece to my lining: the overlap ended up on the right side of the lining layer, but the left side of the outer layer. Sigh.

I ended up cutting off the piece of lining that was too long on the right panel, removing the fleece and sewing onto the other side of the lining, and sewing that lining/fleece strip to the left panel of the lining layer. I lost about an inch to the total length of the piece by doing this, but it turned out okay.

I pinned the lining layer inside the outer layer, fleece sandwiched out of sight in the middle, leaving the edges raw for now. I checked the fit to make sure I could get the harp in and out easily, and that it closed all the way.

The rectangle piece that covered the bottom of the sound box was a bit deeper than the base itself and I found that I could tuck it under the two main pieces of the harp cover to avoid having a gap at that bottom front edge.

Details around the base of the harp 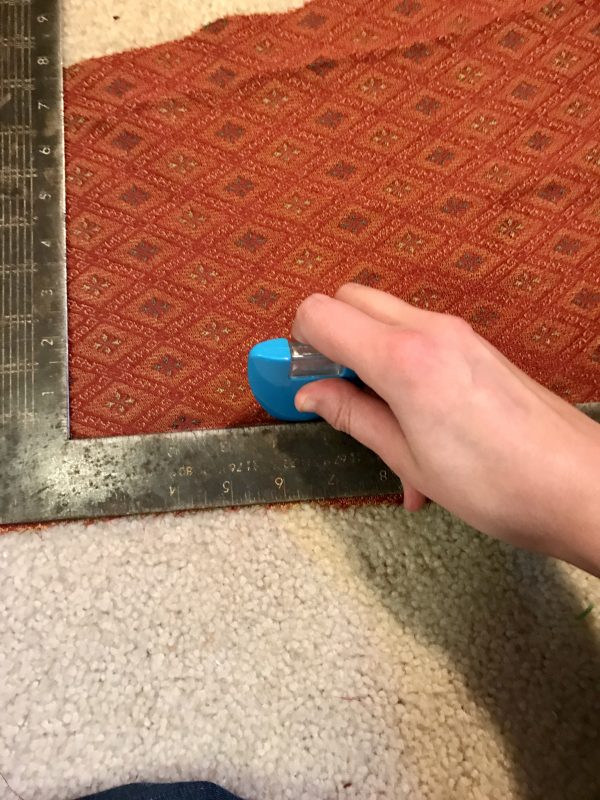 I used a ruler and chalk to mark the fabric..

1.5 inch strips, cut on the diagonal

Pinking the edges reduces any fraying.

I sewed them into one long piece.

I always thought of bias tape as something you buy in small plastic-wrapped packages at the fabric store, but it turns out you can make it. You just have to remember to cut the strips on the diagonal of the fabric, so it stretches around corners more easily. (Another tip I picked up from YouTube.)

12. Sew the bias tape around all the edges.

This is the messy part!

I ironed under one long edge of the the bias tape. Then I pinned it, wrong side up, around the entire edge of the case, on the lining side, and sewed it down (which incidentally attached the lining to the outer layer as well).

Bias tape sewn onto the lining side

I then folded the tape around the raw edges to the outside, tucking the ironed edge under, pinned it in place, and sewed it down.

The corners around the base of the harp were the hardest part!

I put the case on the harp and pinned the Velcro in various places until it closed more or less flat.

Velcro placement at the base

I sew as close to the edges of the Velcro as possible.

Now some of you harpists might be wondering about straps and handles and such. For now I’m content without them since this harp is so light and the case is loose enough that I can still hold it securely by the pillar through the case.

If I eventually decide to add handles or a shoulder strap (maybe in another seven years?), I will update this post.

Twin-Cities harpist Stephanie Claussen invites audiences to explore new locales and eras through her music. Influenced by her love of fairy tales, J.R.R. Tolkien, and the world music section at her local library, she performs a unique mixture of Scottish tunes, J.S. Bach, and anything rich in medieval or French harmonies. Sign up for her e-mail newsletter to receive notifications of upcoming performances and other announcements.

Browse the Blog by Tag:

Get notifications for upcoming performances and other great content: MP3s, video, and exclusive deals on albums!